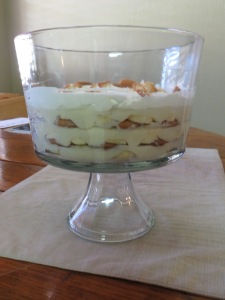 I share a birthday month–July–with two lovely ladies in my family: my mother-in-law, Loveta, and my niece, Lydia. Our birthdays are the 2nd, 12th, and 21st, respectively (talk about easy to remember). For Loveta’s birthday last month, John and I invited his parents over to our house for a home-cooked birthday dinner. On the menu: Honey-Crisp Oven Fried Chicken, Fresh Corn Fritters, Zucchini Hash, and Buttermilk Biscuits. With such a down-home feast, what else could I have served for dessert but Banana Pudding?

I selected Ellie Krieger’s Banana Pudding with Vanilla Wafers recipe from Comfort Food Fix. I had made the dessert a couple of years ago and knew it was a solid one. In addition, it would help me check off another recipe from my Comfort Food Fix cooking to-do list.

I made the vanilla pudding from scratch as directed, but I confess that I did not stick strictly to the rest of the recipe when assembling the dessert. I wanted to serve the pudding in my clear trifle bowl, which is larger than the 1.5-quart bowl that Ellie recommends. Layering just six vanilla wafers in at a time would have been paltry, indeed. So I significantly upped the number of wafers from the stated 24. I also did not whip heavy cream for the topping – I went with Cool Whip. Despite its unnaturalness, I simply prefer it to whipped heavy cream. I guess we all have our guilty pleasures.

The banana pudding looked fantastic in my trifle bowl, and I was more than happy to serve it up as Loveta’s birthday dessert. The four of us gobbled up this 4-star treat in one sitting! 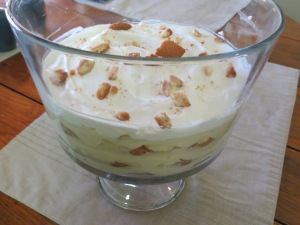 Over the course of many trips to Menard to visit my in-laws, a certain Nutella cake always seemed to find its way into our dinner conversations. Typically this occurred as the four of us were diving into a delectable dessert lovingly prepared by my in-laws, and we would all start throwing out the names of other favorite desserts and dessert-related memories. The Nutella cake came up every time. This was a cake that my in-laws had made and enjoyed multiple times, but that they had never made and enjoyed with us. Finally, it was decided: next visit, Nutella cake. And so it was that over spring break we four adults made quick work of an absolutely wonderful cake featuring–what else?–Nutella.

The cake was so tasty, in fact, that upon returning home I suddenly had an eye out for any and all recipes with “Nutella” in the title. It did not take long before I stumbled across this Nutella-Swirled Banana Bread recipe found on the blog Pass the Cocoa. It was a guest post done by Stephanie Wise of Girl Versus Dough (whose new e-cookbook, Quick Bread Love, you should definitely check out in the menu to the right). When I found myself one Saturday with four ripe bananas on hand, I decided to make up a double batch of the banana bread.

The recipe does involve multiple steps, but with the help of my KitchenAid stand mixer, I had the batter ready to go fairly quickly. My anticipation ratcheted up as I poured in the Nutella layer and swirled the batter around. Even before baking, this bread looked and smelled amazing.

I baked the loaves about 45 minutes rather than the stated 55-60 minutes, but my oven typically runs hot. At this point, I was too eager to try the bread to wait for the loaves to cool completely so that I could drizzle the melted chocolate on top. I sliced John and myself a piece off the end of one of the loaves while they were still warm from the oven. Even without the chocolate topping, the banana bread easily earned 5 stars. It was moist and full of banana flavor, and the Nutella-swirl layer made this the best banana bread I’ve tried.

After the loaves fully cooled, I did drizzle the melted chocolate on top as directed. After letting it set, I wrapped the uncut loaf in plastic wrap and foil and placed it directly into the freezer. John and I would eat up the cut loaf over the following week, but I had a particular destination in mind for the frozen loaf:  Menard on Easter weekend. What better way to reciprocate the Nutella deliciousness that my in-laws had shared with us on spring break than with a Nutella-flavored baked treat of my own? 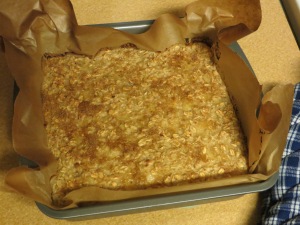 Last weekend, I had 2 ripe bananas on hand and no specific plans to use them. A Google search for “banana recipes” took me to a baked banana oatmeal recipe on the Kath Eats Real Food blog. I love baked oatmeal, and I love bananas, so I immediately knew what I would do with my 2 ripe bananas. I slightly altered Kath’s recipe, adding 2 TB of packed light brown sugar to the wet ingredients and using 2, not 3, bananas that I mashed rather than sliced.

This baked oatmeal recipe is simple enough that the banana flavor is able to shine through. The absolute best part, however, was the caramelized brown sugar topping that is added at the end. It was sweet and crunchy, and it knocked this recipe up to 4 stars. John, who prefers his baked oatmeal plain, even gave it 3.5 stars.  One item of note:  this recipe tastes best right out of the oven; the topping loses its crunch when eaten leftover.

1. Line an 8″ pan (square or round) with parchment paper (for easy removal and cutting), or spray pan with cooking spray. Preheat oven to 375°F.

2. Combine the rolled oats, baking powder, and salt in a medium-sized bowl.

3. Combine the egg, 2 TB of the brown sugar, milk, and vanilla in small-sized bowl.

4. Pour the wet ingredients into the dry ingredients; mix well. Let stand for 5 minutes. Then stir in the mashed bananas. Pour batter into pan.

5. Bake in the oven for 26 minutes. Remove pan from oven and turn up the heat to broil. Sprinkle the baked oatmeal with remaining 1 TB brown sugar. Return to oven; broil for 3-4 minutes.  Serve warm. 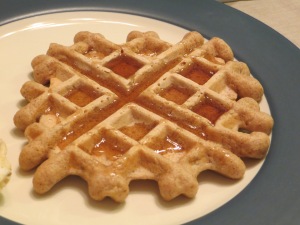 For the past two weeks, I have relished not only being on summer vacation, but being at HOME on summer vacation. John and I ended up having a very busy summer, which included a garage sale, John finishing his Master’s degree at Baylor, and the two of us traveling for nearly the entire month of July. So these final two weeks of our summer break have found me doing homey activities that I love but rarely can do during the school year. After all, who has time to make waffles from scratch when you have to be at work before 7 AM?

One morning last week, I tried out this WeightWatchers recipe for brown sugar-banana waffles. Waffles and bananas – it sounded like a winning combination to me.

I served the waffles with maple syrup, which helped the waffles to earn a solid 3.5-star rating. The banana flavor was just right – not too strong, but definitely detectable in each bite. While it may be months before I have the opportunity to make another batch of these for breakfast, I at least have two of the waffles wrapped up in my freezer, just waiting to be eaten on a rushed workday morning.  Who says I can’t be on time to work and have my homemade waffles, too?

1. Preheat a waffle baker according to the manufacturer’s directions.

2. Meanwhile, combine the whole-wheat flour, all-purpose flour, baking powder, cinnamon, salt, and nutmeg in a food processor; pulse to combine, about 3 seconds. Add the banana, milk, brown sugar, oil, and egg; pulse 3 times. Scrape down the sides of the bowl, then process until smooth, about 30 seconds longer.

3. When the waffle baker is ready, lade in ½ cup of the batter. Close the lid and bake until the waffle is golden brown, about 2 minutes. Transfer the waffle to a plate and keep warm. Repeat with the remaining batter to make a total of 4 waffles. 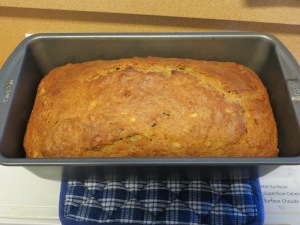 Banana nut bread is a food weakness for me, and unfortunately, it is often loaded with calories and fat. I therefore was thrilled to find a banana nut bread recipe in Ellie Krieger’s Comfort Food Fix cookbook. Ellie often can be counted on to provide healthy-yet-delicious recipes. Considering that I’ve been slightly obsessed with the Comfort Food Fix cookbook for the past week, it was inevitable that I would make a loaf of this bread.

I had already started the recipe when I realized that I only had 3 medium, rather than large, bananas, so I had less than the called-for 1½ cups of mashed banana. This may or may not have had an impact on the final result, in which the bread was slightly dry. I did overcook the bread a smidge. I checked the loaf 45 minutes into its baking time, but I should have done so sooner. The top was a little too brown for my taste, and the edges of the bread were a little harder than I would have liked. However, the inside was still delicious. John, who enjoyed his slices toasted with butter, awarded the recipe 4 stars. I, who ate my slice plain, gave it 3 stars, but I am open to upping my rating in the future when I use the correct amount of banana and do not leave it too long in the oven.

2. Spread the pecans on a baking sheet and toast in the oven until fragrant, about 8 minutes. Set aside to cool.

3. In a large bowl, whisk together the flours, sugars, baking soda, baking powder, and salt.

4. In a medium bowl, whisk together the oil, yogurt, eggs, and vanilla. Whisk in the bananas. Stir the wet ingredients into the dry ingredients, mixing just enough to combine them. Stir in the toasted pecans.

5. Pour the batter into the prepared pan. Bake until a wooden skewer inserted into the center comes out clean, 50 to 55 minutes. Allow to cool in the pan for 15 minutes, then transfer the bread to a wire rack to cool completely before slicing.

(If loaf is divided into 10 servings, the PointsPlus value drops to 6 per serving.)